If you have ever played the popular mario kart or crash team racing (CTR) and you need something similar for your android but you do not where to look for?

Then let me introduce you to Beach Buggy Racing 2 and with its MOD APK available for download at no cost, that is a free download plus you can earn unlimited coins.

Beach buggy racing 2 is an awesome kart racing game where you get to choose from a selection of amazing drivers with their unique traits and special abilities. The game comes with 3d graphics and has some special events where you can earn more rewards.

Cars on bb racing 2 are different in size and designs with their unique specs. Small size cars are always quick on their feet while the bigger ones tend to withstand pressure. As you level up; speed, acceleration, handling, and toughness also get a remarkable improvement.

I have always been a game fanatic, even when I have a very busy day, I always squeezed out time to indulge myself into this beautiful game. With each passing day spent with the game, I am still yet to get enough, the more I play, the more I fall in love with Beach Buggy Racing 2.

Bb racing 2, as it is fondly called by fanatics like us, is no doubt the number 1 kart racer on the android mobile platform. Design your car the way you want it.

About 47 powerups are available to use when in the battle of getting to know who carries the day. They are epic powerups, rare powerups, and common powerups. You should think of upgrading your epic powers but a better chance of winning but keep shield and pickpocket from rare powerups as your allies. 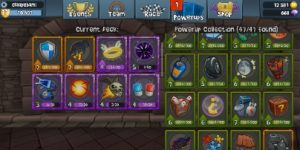 Love the beach? Get your car racing against players from around the world while the water splashes around during the most challenging racing you ever come across, with each competing for the top spot. Racing is not your thing, check out my favourite soccer game, top eleven.

Meet my favourite character, b’zorp, an alien with a unique ability which involves swapping an opponent in the front to its place.

How many times have I been in the second position or third only to activate my ability and boom, I am first. You could see the beam on my face after successful beat others to first. Don’t blame me, I hate losing.

Mcskelly was once a pirate until death came for him. Now reborn and with ability to make him invisible during heavy weapons and drive through cars.

Then we have rez, son to popular coco tanaka, the fun-loving dude definitely knows how to play his card well with his sleek driving which is definitely enough to catch the attention of the ladies.

His everyday list involves buying boots online and engine tunning. His skill is boosting his car speed which leaves a trail that slows down every car that was behind. It could be the hotness the rest could not handle.

No one knows where he came from nor his name, but people enjoy the aroma and taste that comes from his cooking.

He loves playing on the beach with his Hawaiian shirt and loves competing with other drivers for the top prizes. Beach bro’s specialty is dropping balls into the way of his opponents to bounce them of their lane.

There are rumours that benny used to be a cartoon character, which did not go well with her. After a while, she discovered she was good at racing, one influence by her nick for doing the unexpected.

Related:  Minecraft Game For Free: More Than A Video Game

As a bunny, she never outgrew her love for carrots which explains while she becomes an expert in turning carrots as a weapon. You don’t want to stand in her way when she is firing from all angles.

Meet this crazy guy that really knows how to party hard as you want. A sweet-talker who knows his way out of every situation, even among the ladies.

The racer knows music has an effect on everyone, he uses music to distract his opponents during racing.

This character holds the record as one of the best wrestlers, thanks to his quick body and prowess. If he is not in the ring, he is playing golf.

Once he activates his high power wrestling move, you don’t want to be on his lane. Don’t ask me what is special power does find out.

Ability – off the ropes

Oog is not your average sorcerer, he is unlike what you have seen in movies or in the world around you. He had his studies at the prestigious oxford university and enjoy playing golf during his spare time.

A learned man but possesses the power of an ancient god, tiki god, which he normally calls during racing. What it does is block the view of racers which renders them confused.

Was he former military personnel or a mercenary? No one really knows but we know is this one-hand man enjoys racing and adore his poetry.

His skill is dropping bombs during racing which set other racers into massive pandemonium.

Roxie roller was a street fighter who will use her fist first before talking. She changed way when he realised racing would be more fun and in order to keep up the fierce competition, she occasionally uses her punches.

Beatbot was a product of lab, engineered to be the best DJ the world has ever seen. Parties and events won’t be fun without him.

Well only for a while, until it got in bed with an onboard computer game, which eventually influences its decision to join the racer. Knowing that music is a distraction, it tunes up the volume to 11 and bounces the opponent during competition.

The sexy diva queen knows how to make even the meanest of dudes dance to her tunes. Racing has always been her passion but when she is not, she is appreciating every good thing around her.

During racing, leilani will drop flowers which slow and stop cars.

We could say mikka is a little bit crazy, funny in a spectacular way, and enjoys long talks.

She has a knack for launching monster heads that slow down cars. The more attacks on the car, the more slowly they become.

This app is available for download on google play store.

You can also have the game install on apkring by clicking on below link. 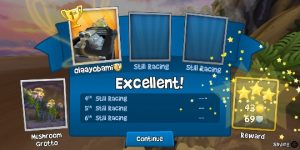