Aside from being able to say I love you in French to that special one you have always held very close to your heart, there are other loads of phrases you could use and still mean the same.

French has always been a beautiful way to express one’s yearning. The intonation even makes it even better, especially if you are a native speaker.

Love has a deep and versatile meaning, it can be an affection shown among families, friends, or among two lovebirds. It is something everyone has to experience no matter where we come from and having to feel that with the language of love, French puts some cherries on top.

The French are no doubt the luckiest, they embrace love and freely discuss the topic. They even have a City named after love and tend to be a hot topic among those who appreciate the concept.

Every year, millions of people from over the world visit Paris, the original city of love, to experience why the city is often advertised as a symbol of love.

What is “I love you” in French? 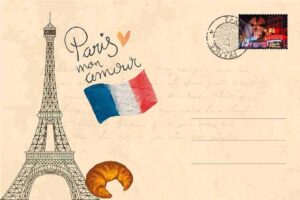 When it comes to declaring your intention, sometimes the right words can be very difficult to say. You do not know exactly what will make the heart tingle.

There are times that you will need to make So long A speech or one converted into text. Whatever ways or methods you choose to do it, the 3 magic words, “I Love You” have more power than you think.

Actions may speak better, but loving gestures such as that can make the difference. If you are in a romantic relationship with someone, they want you to look into their eyes and tell them you truly care about them.

This loving gesture is so powerful and can also be extended to your family or anyone that matters to you. You may even need it to convey your feeling using the words, “I love you”, still, there are also other phrases you could use.

Meanwhile, why not divert from the usual, translate to french and watch as the excitement pops up especially if they are not french. I love you in French actually means “Je t’aim”

Love the sound of it? We also do, it does not matter what language of love you used, you can end always end it with “Je t’aim”

If it is to a large group of people like family members, parents, or friends, you should use “Je vous aime”

How do you say I love you in french

Come to think of it, you do need to use I love you every time you want to convey your feelings to your spouse, partner, or people you have a deep affection for.

There are several other words or phrases you could use. Since, this post is to help you say, “I love you” in French, we will then be giving you french meaning for other languages of I love you.

Below are the other french words for I love you:

“I like you” in french is interpreted as “Je t’aime bien” and this can be used for just anyone. By adding the word, “Bien”, you are telling them you like them without any romantic thought.

It can be used among friends, strangers you just met on the road, or the young lad who impressed you. As I said, by anyone.

It can also be used on those you are crushing on. This will no doubt send an indirect message of love and If you play your cards well, you might end up getting that special being you are in love with.

You can even let them know you care much about them more than they believe. This is why adding “So much” may work some wonders as well.

If the usual 3 little and magic words have had no desired effect, maybe going above could show that you care and want to be part of someone. Although it is usually used among lovers, it can also be used among friends, families, or people you care about.

❦ What is “I want to be with you” in French?

If you ever want to make use of such words, know that you are making a big and deep statement. The fact that you choose to use the phrase instead of the usual lines “I love you” could turn around the boat especially if talks look rigid before.

If you are sending “I want to be with you” in French, it might be good to send a text to allow the fellow to process the thought. However, it all depends on what has come before that.

❦ How to say “I have a crush on you” in French

If you are looking for another phrase to use instead of the usual, “I have a crush on you” is just perfect for the moment.

This can only be used on people you want to be romantically involved with. I have a crush on you simply means you have a deep affection for someone and sometimes a very complicated situation.

For instance, It may be that you started as a friend, but have now gone to a level that it is very difficult to change such status. You might give it a try, who knows if the statement may get a positive response.

If you are considering saying it in french, the words are “J’ai le béguin pour toi”

❦ How to say “I adore you” in French

“I adore you” can also deliver the intended message without saying much. The 3 words could have as much effect as “I like you”

It could open a window for another conversation and this is the window you do not want to miss. Meanwhile, it can also be a form of love shown to a brother, sister, friend, or anyone you are fond of.

If the words need some flavor, why not deliver them in French words?

“I adore you” in French is translated as Je vous adore.

❦ How to say “I miss you” in French

Whether you are in love or have affection for someone, you will definitely miss them at one point in time.

A job could take you out of their reach, or you can’t just go a few hours without them. One of the beautiful ways to convey your feeling is by saying “I miss you” in French.

If such is the way you want to convey the message, “Tu me manques” is the translated French version of “I miss you”

❦ How do I say “Would you like to go out with me” in French?

You can ask them out if you can’t find the right word. Without saying much, that would do the job halfway for you.

This is a nice way of telling them you want to get to know them and perhaps go into a romantic relationship. Anyone will get the message quickly and can be said in french. This now leaves it to a matter of interest.

In French, you will use “Voulez-vous sortir avec moi?” Once sent, you should prepare for an eventful date.

❦ What is “Would you marry me?” in French?

For over the years, men generally have always looked for fascinating ways to propose to their women. Despite the many choices time has presented to us, another way you could propose to your girl is by saying it in French.

If such looks like a decent option for you, then we have got you covered. Would you marry me in French is written as “Veux-tu m’épouser”

“My love” in french means “Mon amour” and it is one of the most lovely words you can use on someone you are romantically involved with.

This has no specific time frame, you can use it anytime and any day. It is also not limited to just for use between boyfriend and girlfriend, you can call your child, “My love” and also a common phrase among girlfriends.

If you choose not to use that, a good alternative is “My dear” which means “Mon chéri” in french.

❦ How do I say “You look sweet” in French?

This can be an indirect way of telling someone that you admire or love them. Since it is a common phrase on social media platforms, it might not be taken seriously unless you find the right words to spark the interest.

Such words can also be used on anyone without any romantic feelings. And if you want to say it in french, the words are “Tu as l’air doux”

❦ How do I say “Without you, I am nothing” in French?

If you have tried all, but still failed to capture the heart, maybe words like “Without you, I am nothing” can turn it around.

This does not have to be when you are still trying to get the girl or guy, it can also be a way to tell them how you feel about them. You can even make it more interesting by saying it in french language.

They do not have to be speakers, the intonation could add some flavors and would surely help. “Without you, I am nothing” in french means “Sans toi je ne suis rien”

Love out it sounds? You should try this out as this is another way of saying “I love you”

You mean so much to me in French is translated as “Tu représentes beaucoup pour moi. This is one of the love verses you should familiarize yourself with as it tends to have a great and calming effect on almost anyone.

It is also versatile which means it can be used for almost anyone. As long as you care for someone, there is no wrong in using the phrase. Irrespective of who you use it for, the message is always well received without being misinterpreted.

❦ How do I say “You are the love of my life” in French?

This is one of the best ways to express how you feel about someone. This normally comes after you have been able to win them over, and reminding them how much you want to be with them will only make the love stronger.

❦ How do I say “I am madly in love with you” in French?

This is making a strong statement and one that is often difficult to ignore by the one you say it to. And if you are to present it in the French Language, the right words to use is “Je suis fou d’amour pour toi”

There are thousands of ways you can show your partner that you are very committed to the relationship. Among the number of ways, is calling them sweet words like “My true love”

How do you say that in French to put some flavor? Simple, “My true love” in the French language is translated as “Mon véritable amour”

“I am fond of you” in French means “Je suis fan de toi” and is a very good alternative to use. It can be said to anyone you are trying to woo or have some fun with.

You can also use it for your friends, family, or someone that impressed you. It is a way of telling them that you do like them. Therefore, it goes with most types of relationships including agape, romantic, love among brothers and sisters, flings, and more.