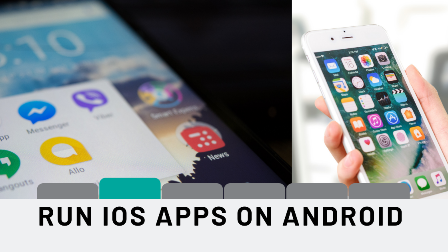 Does it not surprise you when you found this article on how to run ios apps on android phone using ios emulators?

I was surprised too until I successfully ran an apple iMessage game, gamepigeon on my android phone.

Most average users are even yet to explore half of what their android phones can do. Customization has always been selling point of android smartphones, you can tweak things to suit the way you want it.

Almost every feature on your android phone answers to you, does the launcher bother you or you hate the default wallpaper? That can be worked on any android phone. Let’s talk about the boring standard keyboard, don’t be dismay, you can have it changed with installation of app from google play store. That is android displaying its power.

I could go on telling you about why I love my android phone but we may not be leaving here anytime soon. Don’t get me wrong though, I love iPhone too but the android phone is on another new level due to various customization it allows.

Why People Want To Use IOS Apps On Android Phones.

I could say a lot about reasons why people want to run an ios app on android phones. There are apps and games on ios devices which is not made available for android devices. Games like gamepigeon do not have official download links on android play store aside from the ones from third parties.

Not anyone has the financial capacity to purchase the ever expensive iPhone. You might be surprised to see iPhone being on the high cost despite having the same specs.
All that makes iPhone stands out is the premium designs and build quality on all ios devices compared to android, which design depends on the manufacturers.
However, premium android phones, mostly from Samsung can be just as good as ios devices in term of hardware and build.

Years ago, iPhone does not allow third-parties apps unless you jailbreak, which means you have to remove every restriction imposed by apple. Things have gone other side since introduction of ios 9.3, iPhone fanboys no longer need to jailbreak their phones before using ios emulators.

Android naturally allows users to sideload apps. Many would have gone for iPhone but want to experience the easy transition between both sets of the device, all sum in having both worlds.

I will be providing you with methods you can use to run ios apps on android using emulators. Ios emulators are apps to imitate the operation of ios.

I am not wrong if I say IEMU is the most popular one among the few I know. It allows you to enjoy ios platform on android.

Unlike most ios emulators, IEMU does a good job of replacing the look on android to Ios, don’t get it twisted though, it is just a clone version of ios which you can activate with just a click. Your phone is still an android. Lol

What is more, it is very small on storage, you won’t even notice you have a 6mb size of iemu ios emulator on your device. At times, you may face some bugs while using it but it is still a great piece of app.

Here is another ios emulator for android, this emulator works the same way like IEMU except for little differences. While IEMU supports all version of androids, Cider emulator could have problems with Bluetooth, location, and GPS which can be managed though.
One more thing, it does not support all android devices

If you are not bothered about these little setbacks, you won’t regret using Cider because it runs smoothly on your device and does not bend on running on high-end devices, even a 512mb ram with 8gb internal storage would be enough to handle requests.

Here in this post are the best ios emulators for android. If you need help in choosing what is best for you, I will recommend IEMU due to its support for most androids. If your phone fails to install which is rare, you could give the second a try.

Don’t expect it to be all perfect, give it a try and you can be sure you will be getting decent user experience. Play games, explore ios apps not supported on android. With your android phones, you can do more than you imagine.

Click credit UBA: Get up to N5 million loan with no...

All You Should Know About Minecraft Game